As we have discussed in previous articles, decentralization is at the heart of blockchain technology and its potential to change the way the world thinks about money and the global economy. Bitcoin, the industry’s largest cryptocurrency, was created as a completely decentralized entity, but over time has begun to gravitate toward a type of centralization that could potentially threaten its ability to develop and maintain its status as the gold standard for the industry.

The publication of a single whitepaper brought with it the beginnings of a technological revolution. What made the publication of the Bitcoin whitepaper even more interesting is the pseudonymous nature of its author(s). Because the identity of Satoshi Nakamoto is still unknown, the true progenitor of Bitcoin is unknown and untraceable.

Some feel that Satoshi Nakamoto’s desire to remain anonymous is an important factor contributing to the success of Bitcoin. Unlike other cryptocurrencies such as Ethereum and Litecoin, Bitcoin has no creator to act as a figurehead and influence users and investors. Whenever Ethereum founder Vitalik Buterin makes a statement about his creation, the entire market reacts, demonstrating the massive power this one individual has over an otherwise decentralized network.

In addition, Bitcoin utilizes a proof-of-work (PoW) consensus model that keeps its blockchain secure through complex mathematical computations solved by network miners. Miners verify transactions and broadcast them to the rest of the network for verification, and since there are thousands of miners attempting to mine blocks, the network remains secure.

Additionally, because there is more power in numbers on a decentralized network, mining pools were created that consolidate resources to form a single entity that mines blockchain blocks with the collective computational power of all of the participants in the pool. This idea quickly caught on and led to the formation of several large mining pools.

According to the current hashrate distribution (see the diagram below) on the network, no one mining pool controls a majority of the hashing power. However, the number of mining pools is limited and they could potentially take control over the network should they ever decide to collude. 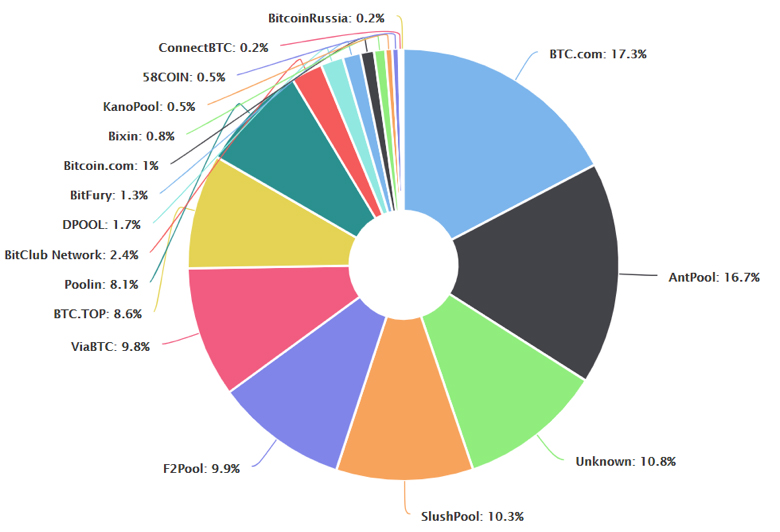 Why is This a Problem?

In theory, this controlling entity might have no problem approving falsified transactions in previous blocks on the blockchain, or prevent new transactions from being approved, thus halting the entire chain in its tracks. There is even a website dedicated to calculating in real-time how much a 51% attack would potentially cost, keeping the entire network on their toes about this potential pitfall. However, these attacks aren’t just theoretical; several smaller cryptocurrencies have already experienced attacks to their networks, with malicious actors making away with significant amounts of cryptocurrency. While there has been no successful 51% attack on the Bitcoin network to date, it poses a looming threat.

The issue of centralization took center stage in mid-2014 when GHash, the largest Bitcoin mining pool at the time, grew to over 50% of the entire network hashing power. Fortunately, the pool refused to use this new power maliciously and soon after resolved to never let its hashing power exceed 39.99% of the network. However, this centralization exposed the network to attack, and thing might have gone much worse had GHash not so readily adhered to the tenets of Bitcoin.

Although it was gracious in ceding its power in the network, GHash pointed out in a press release that others might not have the same compunction: “Successful and innovative companies cannot be expected to limit their growth or competitiveness as a direct result of their success.”

The issue of centralization is not limited to mining. The network of Bitcoin nodes are also shifting toward centralization. Network nodes are the first network participants to whom miners relay transactions after they are processed. As such, nodes form another line of defense against malicious attacks to the network. The greater the number of full (i.e. nodes running the complete Bitcoin blockchain) nodes, the greater the security of the network.

The number of full nodes running on the Bitcoin network has increased over the past several years, but this growth has not matched the growth of the network as a whole. In fact, the total number of full nodes has fallen: after reaching 12,500 nodes earlier this year, their number declined to just around 10,000.

Is There a Solution?

While there is a genuine possibility of a 51% attack on the Bitcoin network, it would appear that little is being done to counter this. There are, however, ways in which the security of the network can be meaningfully improved.

One potential solution to the problem of centralized mining is a change in the consensus mechanism used by the Bitcoin blockchain. The current PoW mechanism carries the risk of centralization at the mining pools that control the majority of the network’s hashing power. Other consensus mechanisms exist that that might be employed to secure the blockchain and promote decentralization across the network. One such alternative mechanism, known as proof-of-stake (PoS), maintains blockchain consensus based on the amount of cryptocurrency held or ‘staked’ to the blockchain, but this approach still runs the risk of one entity obtaining 51% of available tokens. Still, PoS would seem to be a more viable option for maintaining security in a growing network, and it appears that the industry’s second largest network, Ethereum, may well adopt POS in the near future.

Currently, the most promising potential answers to the problem of node centralization are ‘Layer 2’ solutions. These technologies are built on top of the Bitcoin network and work to help scale and broaden the scope of network nodes through protocols that process transactions one layer above the blockchain.

The longer the Bitcoin network operates without an attack that directly results from centralization, the more public confidence in its usability and safety can grow. However, centralization will continue to be a key issue for the network moving forward, and the potential consequences and necessary adjustments will be ongoing topics of debate as the network continues to expand.