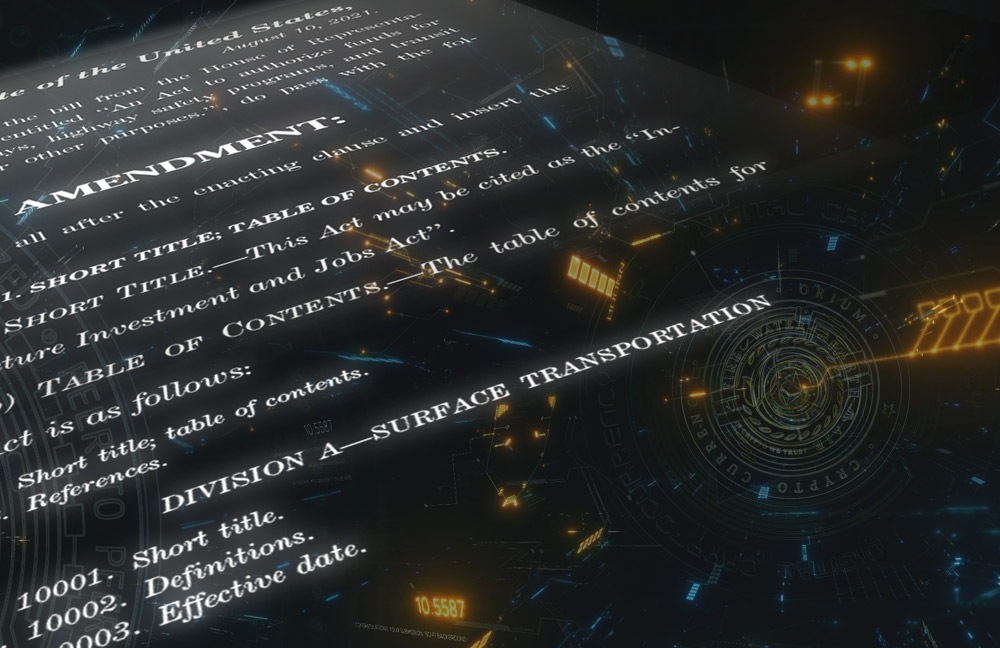 After several months of negotiations, the U.S. Senate passed the Infrastructure Bill in August. Officially dubbed the ‘Infrastructure Investment and Jobs Act’, the bipartisan bill is part of President Biden’s wider economic agenda. The 2,700-page bill proposes certain amendments to crypto regulations that could impact video game developers and other emerging technologies companies.

About the Infrastructure Bill

The $1.2 trillion Infrastructure Bill is the first installment of Senate Majority Leader Chuck Schumer and House Speaker Nancy Pelosi’s two-track legislative strategy to enact Biden’s economic agenda. It passed 69-30 and includes funding for critical infrastructure development including roads, bridges, electric vehicles, broadband, cybersecurity, water, and electrical grid resilience. The passage of the bill represents a compromise of sorts by carving out spending on social programs many Democrats wanted in exchange for some Republican support. Investment in those social programs is expected to be rolled into a massive $3.5 trillion bill for later consideration.

The bill includes a $ 65 billion investment to improve the nation’s broadband infrastructure. The aim is to reduce the cost of internet service by requiring federal funding recipients to offer affordable plans. It also aims to create price transparency by boosting competition in areas where existing providers do not provide adequate service. While this mandate could boost the playing of video games, industry observers say it is one of only a few positive glimmers for game developers amid the bill’s many detrimental effects.

The Potential Impact of Crypto-related Provisions

The Senate version of the bill requires cryptocurrency brokers to report to the Internal Revenue Service (IRS) certain information regarding the returns or profits booked by their clients. Coupled with existing law that requires brokers to report any transactions over $10,000, the new regulation will make it easier for the IRS to track the transfer of digital assets. The ultimate aim, obviously, is to keep tabs on individuals’ capital gains and income in order to collect taxes. This provision is similar to the obligation of a traditional broker to report the sale of a stock or bond. The move signals the U.S.’s continued trend toward treating digital assets as securities and could pave the way for similar treatment of non-fungible tokens. Industry advocates say the crypto-related provisions create legal and regulatory complications for several reasons.

According to some commentators, the definition of the term ‘broker’ is ambiguous and carries the potential to include anyone involved in any kind of cryptocurrency transaction such as miners, stakers, and software developers within its ambit. This is because the bill defines a broker as any person who is responsible for regularly providing any service effectuating transfers of digital assets on behalf of another person.

According to the Blockchain Association, the Infrastructure Bill contains harmful reporting requirements with which many in the American crypto space will be unable to comply. To avoid the onerous regulation and large penalties and fines they would face for non-compliance, many crypto players will be forced to move their operations overseas, taking potential jobs and future economic growth with them.

According to digital rights advocacy organizations, the proposed crypto-related provisions raise privacy concerns, as the IRS’ mandate to collect customers’ names, addresses, and transactions means almost every company that deals in, uses, or accepts cryptocurrency as payment may suddenly be forced to store the personal identification information of their users. This certainly raises issues with respect to privacy and security. Digital rights advocacy organizations such as the Electronic Frontier Foundation (EFF) and Fight for the Future have urged lawmakers to reconsider the crypto regulations that they say threaten citizens’ civil liberties.

Another criticism leveled against the Infrastructure Bill is that crypto technology is not all about the (digital) money. Much of the crypto world does not revolve around the trading of financial instruments but instead includes a wide range of activities such as collecting digital art and deployment of low-bandwidth wireless networks. These activities carry very little risk  of being used to evade taxes or launder money. Requiring such companies to collect detailed information on their users and provide tax returns has the potential to stifle adoption and innovation.

The crypto-related provisions of the Infrastructure Bill could have far-reaching impacts on emerging technologies companies’ innovation and implementation of crypto and blockchain technology as well as their commercial and regulatory futures.

House and Senate negotiators may consider the industry’s objections to the Senate version. Because they were passed as amendments to the House’s INVEST in America Act, both houses will have to agree on a single version of the bill before sending it for the President’s signature. Even if the Senate’s crypto amendments are signed into law, it will take some time before its full impact becomes clear. Still, companies involved in the crypto space should prepare sooner rather than later to deal with potential new requirements and assess their business models. Consulting an attorney experienced in the emerging technologies space to get tailored advice on how the IRS reporting provisions will affect them may be the most prudent course of action.