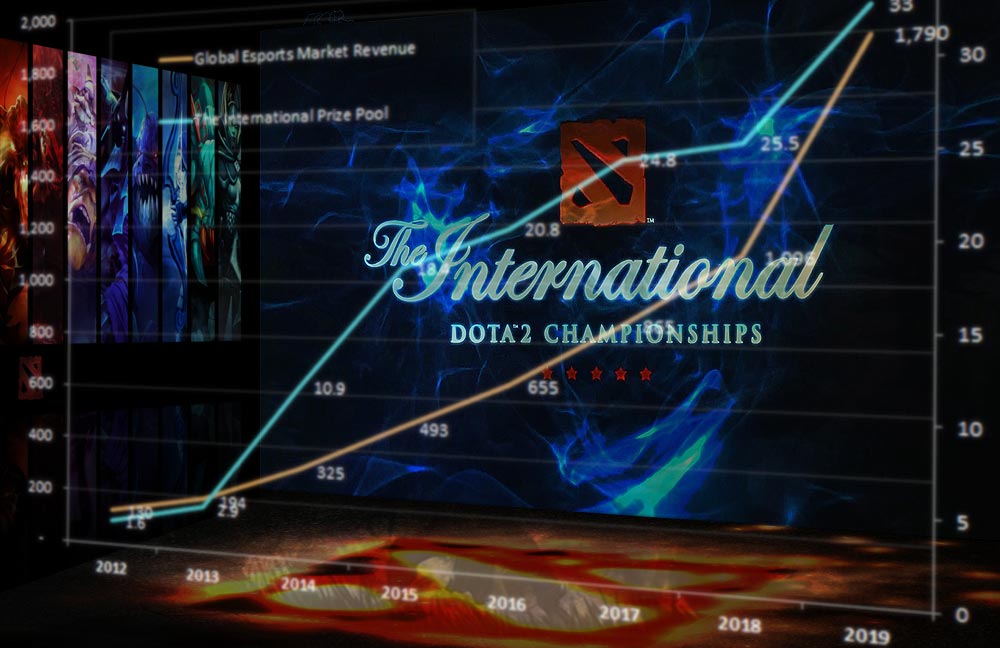 This summer, the annual Dota 2 world championship esports tournament, ‘The Invitational’, has once again made headlines for a record-breaking prize pool. In its ninth year, the Dota 2 championship pot has grown to $33.4 million. The figure alone is newsworthy for beating the recent $30 million Fortnite World Cup purse, but has further significance because it makes TI9 the biggest payout for a single esports event to date, and because the majority of the prize pool was accumulated through crowdfunding.

The International’s prize pools have included a crowdfunded component since TI3, which was held in 2013. Ahead of TI3, the first ‘Compendium’, an interactive booklet that tracks tournament statistics and usually includes tournament tickets, was launched and a portion of its sales was allocated to The International’s prize pool. Together with Valve’s fixed prize pool contribution of $1,600,000, proceeds from compendium sales grew the TI3 prize pool to $2.9 million.

Every year since then, the range of Dota 2-related products that contribute to the prize pool has grown to include battle passes and other in-game items, and incentives have become increasingly attractive to players. By 2018, the crowdfunded portion of the prize pool had grown to almost fifteen times the size of Valve’s fixed base contribution. Last year’s TI8 broke the standing record for prize pool by raising $25.5 million in crowdfunding, almost a million dollars more than the previous year’s event, before being surpassed by the Fornite World Cup Purse in July 2019.

This year, players can purchase the base battle pass for $9.99, run the challenges in it, and opt to invest again for more leveling options. While funds from battle passes for other games such as Apex Legends generally go entirely to the publisher, 25 percent of the revenue from sales of selected Dota 2 items goes to the championship pot, well into the event season. As a result, players are able to actively contribute to the success of The International, which goes a long way to keeping the players and audience engaged over the year-long circuit.

As a result of player contributions, The International holds six of the top ten largest prize pools in esports history. Epic Games’ 2019 Fortnite event now holds second place, and Riot Games rounds out the lower three spots, with the largest of their prize pools being $6.4 million for League of Legends Worlds in 2018. Moreover, annual growth of The International’s prize pool has outperformed the growth of global esports market revenue, as illustrated below. 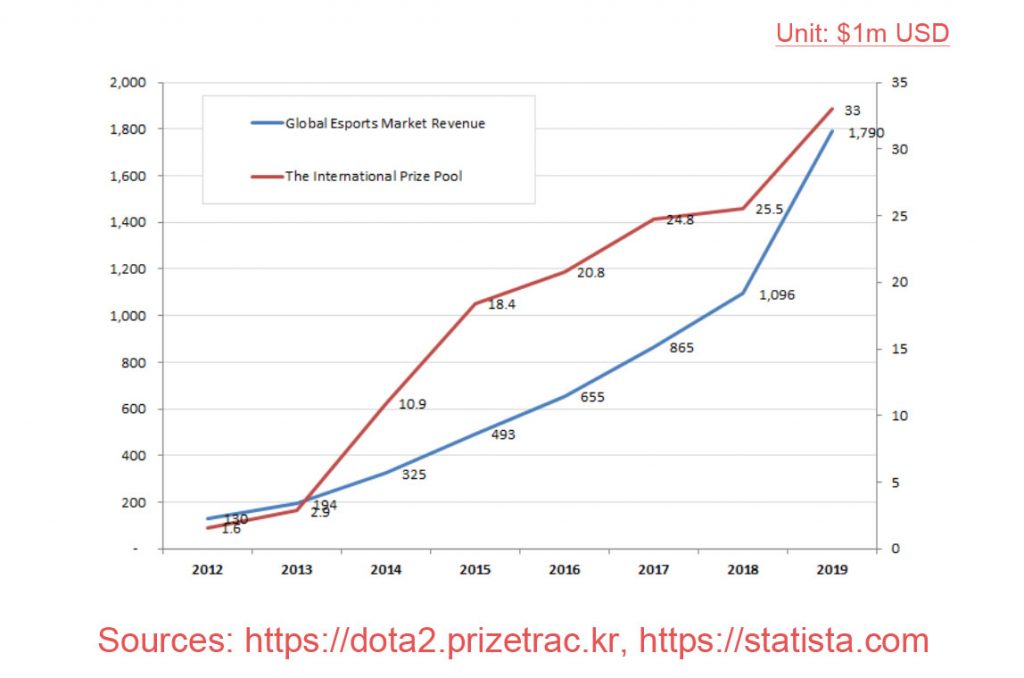 One might expect that the steady growth of the event’s prize pool would correlate with an increase in the popularity of Dota 2, but this has not been the case. The August 2019 player base for Dota 2 was 452,726 players, but peak player base was reached over three years ago when 709,103 players logged on in February 2016. The growth of prize money has been a result of the support of the solid player base of 500,000 or so and the effective development, promotion, and sales by Valve of the Compendiums, battle passes, and other in-game items that support the prize pool.

How long Valve and the Dota 2 community can maintain the growth of The International and its prize pool is anyone’s guess, but the longevity and exceptional success of the funding model has already led some other developers and publishers to follow suit, for example the Smite World Championship and recently the League of Legends World Championship. At present, however, the Fortnite World Cup Finals is the only other tournament that has exceeded $10 million in prize money, so competition is at present limited and for now The International reigns supreme.