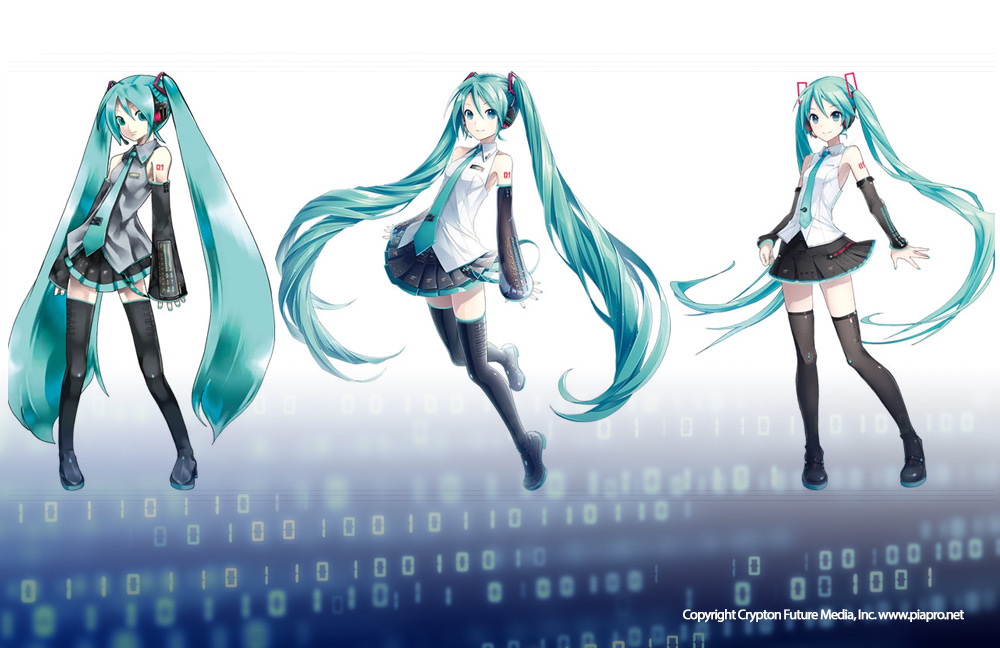 On her own, Japanese pop superstar Hatsune Miku can’t sing. Nor can she rap, dance or DJ. She is drug- and alcohol-free because she can’t indulge in either, and she can’t have affairs or engage in offstage shenanigans fit for YouTube scandals or tabloid headlines. Now entering her sixth year as a beloved idol with a global fan base, she looks as youthful and demure as she did when she debuted. She can’t even get old.

“She doesn’t exist,” says her creator, Hiroyuki Itoh, with a brief shrug. “Never has.”

Itoh, CEO of Sapporo-based Crypton Future Media, is a software developer and so-called meta-creator, whose goal is to aid others in realizing their artistic endeavors. In 2007, he asked a graphic artist named Kei to create an anime-inspired digital avatar, the kind of cartoon-company mascot common in Japan, to represent both Crypton and its virtual-voice program for Yamaha’s Vocaloid software — a singing-voice synthesizer.

Vocaloid enables its users to create songs by typing in lyrics and melody, then hear them sung through a bank of prerecorded and remixed human voices. But in its initial incarnations, users found Vocaloid lacking. Something fundamental was missing — a visualized and visible singer. Kei’s creation, the long-legged, green-eyed, turquoise-pigtailed Miku, quickly emerged as the Vocaloid “performer” of choice, a mega-mascot for consumer-generated media (CGM).

“Other Vocaloid (avatars) are popular, just not as popular as Miku,” notes Ian Condry, a professor at the Massachusetts Institute of Technology who is a specialist in Japanese popular culture and teaches a section on Miku. “(She) was the first to cross the threshold of quality voicings, the first to be presented as a character with a look. Like all popular culture, things are popular because they are popular, so Miku had a first-mover advantage.”

Naomitsu Kodaka, cofounder and CFO of TokyoOtakuMode (TOM) Inc., which provides platforms for otaku (obsessed fans) via its website and a Facebook page with 11 million “likes,” says Miku may be TOM’s most popular character.

“I think one of the reasons she’s so popular is because otaku can collaborate openly with the character without commercial concerns,” he says. “Plus, they can be both artist and audience, creators and consumers.”

But Miku’s appeal is no mere otaku fetish. According to Kodaka, 90 percent of TOM’s users are from English-speaking countries, the majority in the United States. Visit any of the almost weekly U.S. anime conventions that take place across the country and you will encounter a sea of cerulean-stained Miku cosplayers, some performing amateur skits and dances based on Miku’s songs, many of which were created by other fans in the first place. She’s a user-generated loop.

Miku’s live pop performances have been staged in Tokyo, Singapore and Los Angeles. Surrounded by human rock musicians, her dancing, brightly lit 3-D image is projected on a screen while her voice, sampled from Japanese voice actress Saki Fujita, warbles coyly. Fans sing along and keep the beat in unison with their glowsticks. The result can be seen in legions of online video clips: an ethereal meshing of fans and their haloed idol, united by glowing light and rhythm.

Still, pop celebrity can be as fleeting as a nanosecond even for flesh-and-blood stars, let alone a sketch and hologram that can’t feed the media maw with salacious gossip.

“Versatility is necessary in all cultural movements,” admits Itoh. “You sustain variety by keeping versatile, and that means that new attractive content must be born.”

Last November, Miku went highbrow. The new attractive content was “Symphony Ihatov,” a composition based on the writings of revered author Kenji Miyazawa, and her collaborators were the Japan Philharmonic Orchestra and veteran electronic-music composer and pioneer, Isao Tomita. Miku’s digital image soared above the nearly 300 classical musicians assembled in Tokyo’s Opera City Concert Hall, and her digital voice was employed as another instrument, used subtly amid the melded strings and synthesizers.

“Forty years ago, I worked hard trying to get the filter on a Moog synthesizer to produce a human sound,” Tomita said in a recent interview with website MTV 81. “I first saw Miku on a 30-minute TV program and it developed my interest. Until now, Miku has been something preprogrammed, and all the songs and moves were predetermined. I wanted to see if Miku could sing along with the orchestra, sing properly by following the conductor.”

One reviewer praised the “refined” use of Miku’s voice in the concert, integrated with acoustic instruments to “(create) a dizzying crescendo of sounds both traditional and technological.”

Last December, Miku was central to another milestone: the first Vocaloid opera, created by musician and artist Keiichiro Shibuya and novelist/playwright Toshiki Okada. The multi-media composition, titled “The End,” had its premiere at the Yamaguchi Center for Arts and Media—and featured no human performers at all.

Miku’s next foray, a CD recording with Japanese noise band Hijokaidan, was released in January.

“For me, Miku is just one kind of common interface for creativity,” says Itoh, attempting to explain her latest crossover ventures. “The interface allows for different kinds of creative remixes. It’s not just a singular style.”

Condry agrees. He sees Miku not as another offshoot of Japanese popular culture, otaku lifestyles or technological savvy, but a variation on contemporary interfaces that engage users and intimately involve them in the act of production.

“It’s history in the making,” he says, “but it’s not unique to Japan or animation. It’s part of a broader process whereby media companies are focusing on creating platforms of participation rather than content for consumption. Facebook, Twitter, Wikipedia, Nicodo, Miku — these are all examples of platforms where users generate the content, the interaction, and the social networks bring these things to life.”

But unlike Facebook’s customized logo font and the Twitter bird, Miku is a representation that at least appears human. And with “her” gentle hip sashays and skirt-flipping booty sways, she’s not an unattractive female human at that.

“To me, it seems hard to frame (Miku) as simply a user-generated-content platform,” argues Rebecca Suter, professor of Japanese studies at the University of Sydney. “Miku has a name and a gender, much closer to an anime character, something artificial but personified enough to become an object of emotional investment. What is interesting is that Miku’s appeal goes well beyond the relatively niche audience of Japanese (and non-Japanese) otaku.”

For Suter, Miku’s trans-cultural draw is rooted in the character’s tabula-rasa blankness, enabling fans and users worldwide to see (and hear) in her whatever they want.

“It reminds me of Haruki Murakami’s literature in the way she appeals to different audiences for different reasons. For a Japanese customer, Miku can be read within familiar frameworks of idol culture and the attraction to manga and anime characters, which she resembles; for a foreign customer, she has the exotic charm of ‘Cool Japan,’ and can be the object of techno-orientalist fascination.”

Miku has no story. Her only defining characteristics are physical. She is a diminutive 158 cm tall and weighs all of 42 kg. She has very long pigtails and legs and wears a long necktie and very short skirt. That’s about it.

Via Crypton’s PiaPro website, which uses a licensing system modeled on the nonprofit Creative Commons platform (which Miku officially “joined” this month), you can make her sing the songs you write for her. Via MikuMikuDance, a fan-made program and website, you can create and direct the videos to promote those songs.

The appeal of a blank-slate icon is often cited to explain a much older mascot of Japanese popular culture — another female, but this one feline. Hello Kitty’s mouthless hollow-eyed stare allows fans and collectors worldwide to project their own feelings, fantasies and longings onto Sanrio’s 38-year-old cash kitten, and while she does have a back story (her name is Kitty White and she is English), no one pays it much heed.

Itoh is at great pains to distinguish Miku from other recent pop-culture holograms, most notably the Tupac Shakur holographic rendering that seemed to bring the deceased rapper back to life at the Coachella festival in Indio, California, last. Onstage, the muscular and lifelike Shakur hologram traded rhymes with an old friend, the very-much-alive Snoop Dogg.

Miku is popular precisely because she is unreal, Itoh insists — or perhaps hyper-real, a pure fantasy that users and fans find intimately liberating.

“I saw (the Tupac hologram) on television,” he says. “But he was a real person with a real voice. Miku’s voice is completely processed. It’s only the people who make her music that exist. Their songs are like a shout or yell from their souls. They’re not in the music business, they’re not in it for business at all. They just want to make Miku sing.”

This is an updated version of a story that first appeared in The Japan Times by Japanamerica author Roland Kelts.