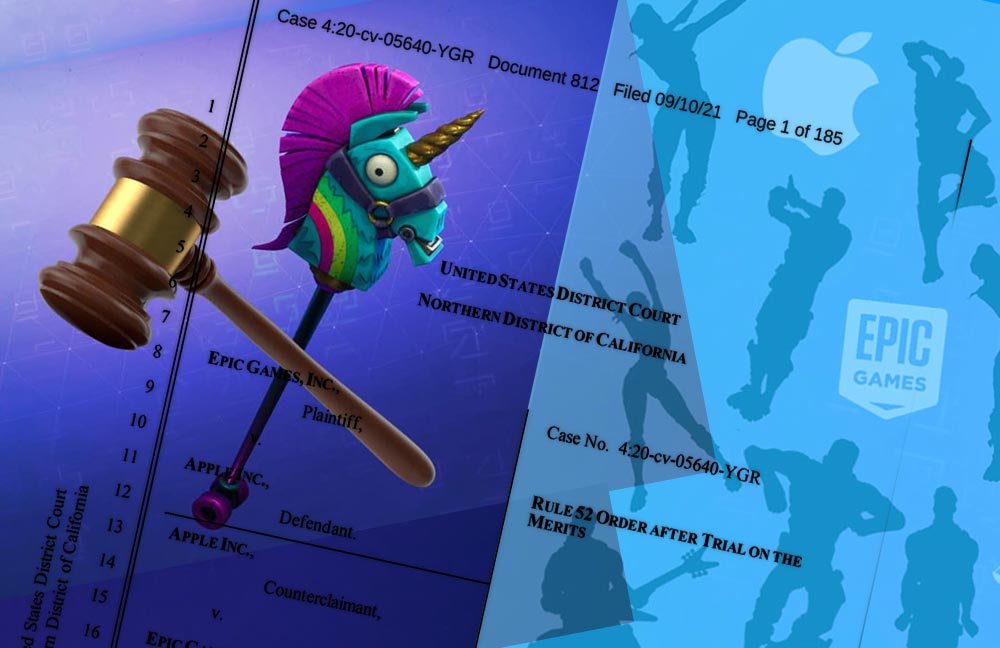 Many of today’s headlines proclaim Epic Games’ “victory” over Apple in their landmark lawsuit announced this morning by Judge Yvonne Gonzalez Rogers in the District Court for the Northern District of California. As usual, however, the reality is less clear-cut.

In a win for Epic, the judge did rule Apple violated antitrust laws by forbidding developers from providing links or otherwise communicating the availability of alternative methods for making in-game purchases (referred to as the “anti-steering” policy). The decision allows app and game makers to send users to their own websites or third-party storefronts to make the purchases, circumventing the App Store and its 15- to 30-percent commission structure.

The implications for the longstanding app store model in iOS and other platforms should not be underestimated; however, it is the only one of ten questions Gonzalez Rogers decided in Epic’s favor. Most notably, the judge did not find Epic’s evidence sufficient to declare Apple a monopoly in the video game distribution market in which it operates. In particular, she dismissed Epic’s argument that the market constitutes only those accessible and playable on iOS devices. Instead, the judge determined the market to consist of “all digital mobile gaming transactions,” thus lumping iPhone games in with those played on Android phones and other mobile platforms. By expanding the market, the decision effectively reduced Apple’s share of it. Therefore, “[t]he Court does not find that Apple is an antitrust monopolist in the submarket for mobile gaming transactions,” the judge ruled.

Judge Gonzalez Rogers said Apple’s profits are largely due to its strategy and implementation and that the company should not be punished merely for being successful.

The Final Demise of Anti-Steering

On the issue of Apple’s anti-steering policy (Google has a similar rule), the judge ruled that Apple cannot prevent developers from including “buttons, external links or other calls to action in their apps and their metadata that direct customers to purchase mechanisms in addition to in-app purchase” or from communicating with customers voluntarily through contact points obtained through account registration within their applications. Doing so would allow Apple to “hide critical information from consumers and illegally stifle consumer choice. When coupled with Apple’s incipient antitrust violations, these anti-steering provisions are anticompetitive and a nationwide remedy to eliminate those provisions is warranted.”

According to the judge, removing Apple’s ability to steer all in-app purchases through the platform it controls “will increase competition, increase transparency, increase consumer choice and information while preserving Apple’s iOS ecosystem which has procompetitive justifications.”

The court’s order preventing Apple from continuing to enforce the anti-steering policy would have been regarded as significant a few months ago, but recently it had become clear that Apple’s and Google’s prohibition against informing users of other payment options would soon go the way of the flip phone anyway.  Just in the last two weeks, Apple agreed to a proposed settlement with developers challenging the policy in Cameron v. Apple (also in Judge Gonzalez Rogers’ court) under which it agreed to allow developers to communicate with users outside of apps and provide them with information regarding off-app payment options. In addition, the Korean legislature passed a law requiring platforms to permit apps to include links to alternative payment options within the apps, and the Japan Fair Trade Commission announced a settlement with Apple under which Apple will allow reader apps (e-books, news, audio, video and music apps) to link to external sites for subscriptions — which Apple said would be applied globally beginning in 2022.

The court’s decision goes beyond Apple’s proposed settlement in the Cameron case, as developers will now be able to include the competing links directly in their apps (rather than e-mailing or texting users to inform them of other payment options).  However, the judge stopped short of requiring Apple to allow developers to include alternative payment methods directly in the apps themselves.  (In a development that has received little attention, the “Open App Markets Act” bill introduced to the US Congress last month would go even farther than that, requiring that platforms include competing app stores.)

The End-Run and its Result

Epic v. Apple began more than a year ago when Epic announced the “Fortnite Mega Drop,” a promotion that grants players permanent discounts of up to 20% on V-bucks, Fortnite’s in-game currency if they purchase them via Epic’s direct-payment system on PCs and consoles. In other words, Epic incentivized Fortnite players to stop making in-app purchases in order to avoid paying Apple’s required 30 percent cut of all in-app purchases. Apple quickly responded by pulling Fortnite from sale on the App Store.

Apple’s commission policy has long been a sore spot for Epic and other developers, and Epic’s end-run around the commission structure was a premeditated effort to bring the issue to a head as it filed suit and launched a coordinated public relations blitz within hours of its banishment from Apple Store.  It’s clear from the decision that Epic’s carefully planned war effort won it no points with the judge.

Rogers ruled that Epic wrongfully breached its contract by defying Apple’s rules against steering customers away from app store commissions. Therefore, Apple was justified in terminating the Developer Product Licensing Agreement (DPLA) and related agreements between the two companies. “Apple has the contractual right to terminate its DPLA…at any time and at Apple’s sole discretion,” Rogers wrote.

As a result of its breach of contract for contravening Apple’s in-app payment system, Epic was found liable for damages equaling 30% of the revenue it collected from users in the Fortnite app on iOS through Epic Direct Payment between August and the date of judgment. This will be at least $3.6 million, as Epic collected over $12 million in such payments from August through October 2020.

Despite the mixed messages in the judge’s pronouncement, Apple has not indicated whether it will appeal the anti-competitiveness finding that went against it. Epic has said it would appeal the finding of Apple’s non-monopoly status, perhaps finding an area to explore in Rogers[ stopping short of applying Apple’s preferred definition of the market as comprising “all video games.”