Jefferson Smith: I-I-I don’t think I’ve ever been so thrilled in my whole life. And that Lincoln Memorial! Gee whiz. That Mr. Lincoln, there he is. He just lookin’ right straight at you as you come right up those steps. Just – just sitting there, like he was waiting for somebody to come along.

In Frank Capra’s classic movie about the Ordinary Guy who encounters Washington D.C., and the world of politics, the collision is framed as an encounter between the regular world of common sense, decency and everyday, ordinary people and the Byzantine world of Washington politics. In a lot of ways, things haven’t changed much since 1939, when that movie was made, and today. You just have to replace Mr. Smith with, say, Squirtle, the Pokemon Go character, and you have a very similar script. It’s an illuminating, if not especially directional, look at how Washington grapples with a big, new technology. Things must have been the same when the internal combustion engine was introduced.

A little background: on November 19, 2016, the Senate Committee on Commerce, Science and Technology, held a hearing entitled “Exploring Augmented Reality”. Five witnesses provided over two hours of testimony, including:

Back in the nineteenth century, the famous German statesman Otto Von Bismarck is said to have said that there are two things you don’t want to see being made: laws, and sausages. The Committee’s hearings are the first step in making the former, and they’re revealing. They’re also online – if you want to watch for yourself, a complete video of the entire thing can be found here: http://www.commerce.senate.gov/public/index.cfm/hearings?ID=9C42F271-98FE-4146-ADD9-8909E5C2020D

What follows are some observations about the whole show. It’s impossible, of course, to be anything close to comprehensive about it, but it’s fascinating to see the slow, ponderous machinery of government begin to try to understand AR, and consider what to do about it.

Observation #1: The Industry is Scared to Death of Regulation

As a technology, and a business, A/R is just getting started, but several of the speakers pointedly referred to the need to prevent strangling the industry in its crib by regulating it too much and too early. Everybody seems to feel it’s coming, but everybody also wants to make sure, to continue the infant analogy, that the baby isn’t thrown out with the bathwater. Brian Blau, of Gartner, put it this way:

For the market to grow it’s critical that you carefully consider any actions that would restrict or limiting AR’s innovation process. AR needs development and maturity in many areas and will for many years to come. A particular focus should be around usability, safety and security. The requirements are higher here;; AR –is– the experience and it could falter if the technology is restricted in ways that don’t allow for experimentation, invention, testing, and ultimately broad use in many aspects of the consumer and business markets.

As anyone who wasn’t living under a rock knows, Pokemon Go was a global phenomenon. Released in July 2015, over 500 million copies were downloaded, and despite some technical glitches and a user experience that was more than a little primitive, the game was an overwhelming, if short-lived, hit. And despite several years of AR use cases in business, a great, big global hit was what finally, really got the attention of Washington and drew the first real line between AR and VR. Senator John Thune, the ranking majority member of the committee, said as much in his opening statement:

This past Fourth of July weekend, many Americans began to notice an unusual phenomenon: more and more people – far more than usual – were going outside.  Suddenly, sidewalks, parks, and local landmarks were packed with people wandering the great outdoors while burying their heads in their smartphones.

These people, of course, were playing the smash hit mobile game Pokémon GO.  But by going out into the real world to find and capture digital creatures, they weren’t just playing a game – they were getting their first exposure to the possibilities of augmented reality.

Squirtle and his pals made quite an impact.

Observation #3: Although Entertainment is the Tail, Complex Manufacturing Is The Dog

There are a lot of cases for AR, starting with entertainment – Squirtle and his commercial progeny. However, where the immediate, overwhelming potential of AR rises up is in the realm of manufacturing, specifically complex, big-ticket industrial manufacturing such as the assembly of airliner wingtips. In his testimony before the Committee, Brian Mullins, of DAQRI, described what happened when AR used to help guide and train workers: 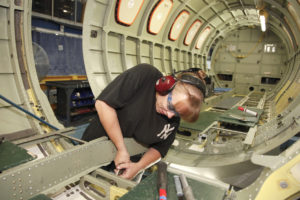 Accuracy: Trainees utilizing AR instructions made fewer errors than those using desktop instructions by a factor of 16-to-1 on the trainees’ first time completing a task. On the second time around, those using AR had perfect performance — zero errors. Overall, the AR work instructions improved first time quality by 94 percent.

Speed: Trainees using AR instructions were able to complete tasks significantly faster than their counterparts, reducing job completion time by an average of 30 percent and, in some cases, as much as 50 percent.

Greater focus: AR allowed workers to maintain focus on the task at hand. Trainees using AR looked at their instructions less frequently and for shorter periods of time, demonstrating that comprehension was happening rapidly. As the team put it, “The fewer number of looks meant that participants were not ‘bouncing’ back and forth between the instructions and the physical task.”

Imagine you’re a member of Congress. Imagine further, which doesn’t take a lot of work, that your district (or state) has lost a lot of good-paying manufacturing jobs to, say, China. Or Indonesia. Or elsewhere. And to paraphrase Bruce Springsteen, those jobs are going and they’re not going back. Cost and productivity are not keeping pace.

Until now. AR, particularly to a politician faced with shuttering plants and losing the tax base, may be the first seriously viable solution to making workers, companies and perhaps ultimately the country, competitive again. If you can augment workers with AR systems that allow them to work, as the Boeing trainees did, faster and with far fewer errors, that could be a game-changer. And as a politician, you’re going to enact laws and promote regulation that will enhance that.