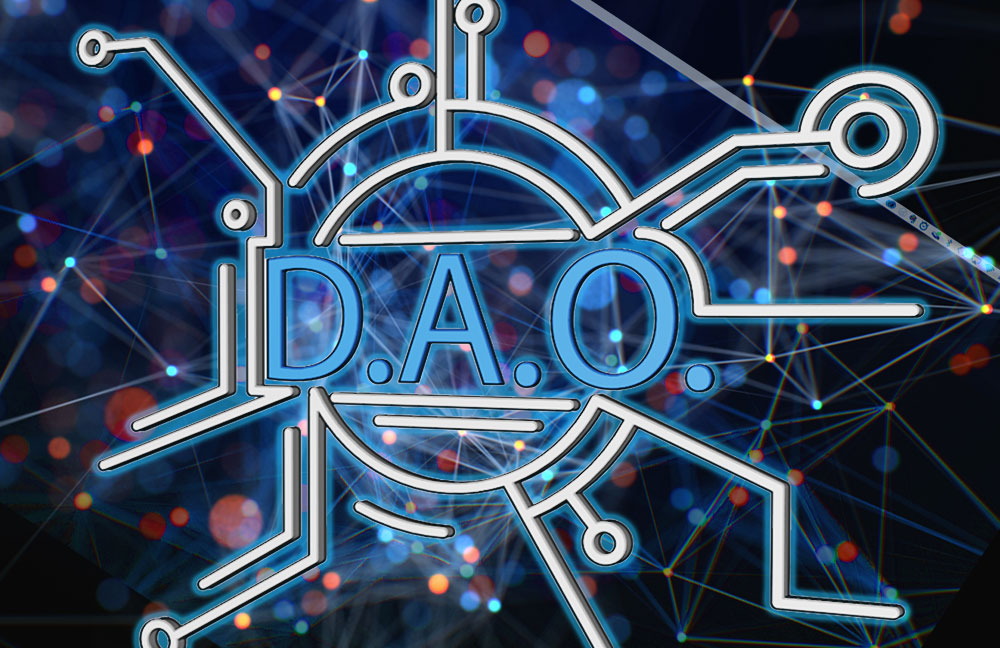 Bitcoin introduced the world not only to decentralized currency, but also to a new way to organize and operate large scale projects. As an open-sourced, decentralized protocol that is not owned or operated by any single entity, Bitcoin provided a new paradigm that could be extended and applied to actual organizations. This model of organizations that are sustained and run by networks of participants is now being proliferating and developing, creating a new ecosystem of organizations for the global, digital age.

What is a DAO?

For over two hundred years, corporations have been the most popular structure for companies to take. In this model, owners, employees, and customers form a hierarchy in which owners hold ultimate decision-making power within the organization. However, the advent of smart contracts and blockchain technology has paved the way for new manners in which to organize and grow businesses.

A DAO (Decentralized Autonomous Organization) is an organization that has no centralized ownership or hierarchy, and is operated by a decentralized base of stakeholders which can include customers, employees, shareholders, and others. Rather than applying management by humans, a DAO operates under laws of code which are open for all stakeholders to review and monitor. Decisions within a DAO are made not in a hierarchical structure, but instead by democratic voting.

The first DAO achieved renown not because of its success, but because of its epic failure. In 2016, a decentralized organization was created for the purpose of investing in cryptocurrency projects. This DAO would collect funds from investors, pool those funds together, and allow DAO token holders to submit proposals to fund projects. Known simply as, “The DAO”, this organization operated on the Ethereum blockchain and at the time raised around $150 million in Ether tokens.

A mechanism within The DAO was implemented to ensure that minority holders could not be taken advantage of by the majority: minority holders were able to retrieve their funds if they voted to reject a proposal but that proposal still went on to be funded. Unfortunately, a malicious actor discovered a way to utilize this function to retrieve funds many times over before The DAO became aware of the deceit. Ultimately, the attacker made off with 3.6 million Ether.

The damage was not limited to the loss of Ether. Following the attack, the Ethereum blockchain was split in a hard fork in order to roll back the stolen funds and return them to The DAO investors. The split caused a deep schism in the Ethereum community: some Ethereum stakeholders challenged the idea of rolling-back the blockchain, taking the position that code should be immutable and never subject to revision. These stakeholders went on to adhere to the original Ethereum blockchain and rebranded themselves Ethereum Classic.

Rising from the Ashes

Following the debacle of The DAO, skepticism about this new type of organizational structure ran high among the media and general public. However, many developers and industry experts still saw potential in the concept, and contributed to building the support infrastructure required for DAOs to operate effectively. Today, many projects are in progress to deliver such infrastructure and educate the public on what DAOs are able to accomplish. The common overarching goal is to allow anyone to create their own DAO without any technical knowledge or background.

Aragon is creating a suite of tools for the creation and management of DAOs. The project operates as a DAO itself, a testament to its commitment to the new space. While the project is still in its early stages, key functionalities, such as a voting mechanism, funding, and payroll, are already available. DAO stack is a similar project which acts as an operating system for decentralized organizations; it allows for seamless collaboration between DAO participants and facilitates the management of workflows and processes.

Other decentralized services exist to enable DAOs to operate in a fully decentralized manner. Programs such as Gitcoin allow organizations to decentralize the bounty process, which is extremely helpful in the world of development; file storage services such as IPFS encrypt and distribute pieces of files around the globe; decentralized lending platforms such as DeFi or MakerDAO provide loans which can be collateralized by cryptocurrencies in order for investors to finance new DAOs.

Today, increasing numbers of projects and organizations are adopting this organizational method. Ethereum is one notable example: while Ethereum founder Vitalik Buterin remains a prominent figurehead of the crypto asset, the project actually operates as a DAO, with no centralized control for the project’s operations. In fact, most major cryptocurrencies operate as DAOs, adhering to the tenet of decentralization that made blockchain technology so intriguing in the first place.

In fact, a wide variety of projects are embracing this new paradigm. Fundraising DAOs, backed in some cases by venture capital and in some cases by crowdfunding, are now shaping the future of fundraising. For example, Giveth is an open-source charitable giving DAO, and the Daox protocol helps organizations fund their projects, and gives investors voting rights in their investments.

Another area currently gaining traction is decentralized prediction markets which do not rely upon any singular point of failure or entity to attest to outcomes. In this model, users create prediction markets to wager on outcomes of specific events. When an event concludes, winners are paid via smart contracts. If the outcome of the event is in question, a user may challenge the outcome, following which a decentralized network of participants verifies the correct outcome.

Augur is the biggest name in this space, and allows anyone to create their own prediction market and/or wager on outcomes on everything from sports to weather to political predictions.

A New Type of Organization

While the concept of a decentralized organization is still foreign and in some cases even incredible to many, it is possible if not likely that the corporation may one day be supplanted by other, better ways to operate businesses and projects, and DAOs may be one. Even now, the wisdom and long-term viability of the corporation is in question; in addition to ethical and environmental concerns, some of the world’s biggest companies have so much power that they have major political influence, and some are considered by some to be in violation of antitrust laws.

After 200 years of social, technological, and organizational evolution, the world may be ready for a new type of organization: one which aligns all stakeholders in a democratized fashion so that no single entity can inequitably exert its power or control over others. Doing so will bridge the gap between those in power and give that power back to the people. Many proponents of DAOs believe that the next evolution of business is here, and it is decentralized.