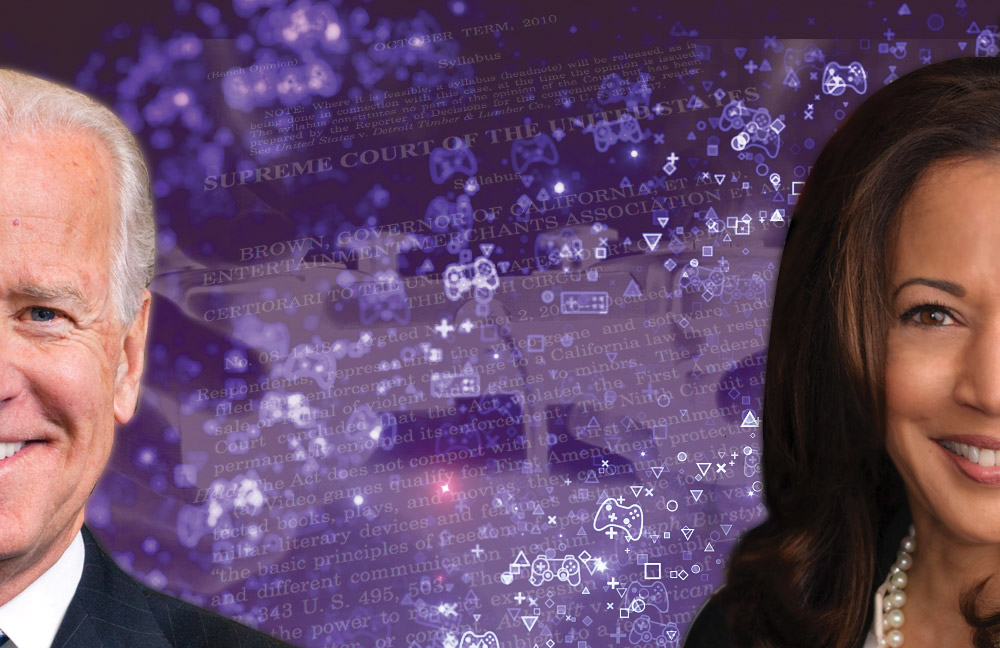 Parents, educators, psychologists, politicians, and creators long have debated the effects of violent movies, television, and other forms of entertainment. Many popular video games, for example, challenge players to kill their enemies, crash vehicles, and blow things up. Children often entertain themselves with virtual acts of realistic violence, creating real concerns that video games may exert a negative influence on young people’s behavior.

The issue arose in a 2011 case involving vice-presidential candidate Kamala Harris, then California’s attorney general. As the political tides change, could America see an increase in rules and laws aimed at curbing violence in video games? What can we interpret about a potential Biden administration’s treatment of the video game industry from Senator Harris’s handling of the case? The case was stemmed from a California law passed in 2005 under Republican Governor Arnold Schwarzenneger. Democrat Jerry Brown, attorney general at that time, was elected governor in 2011, with Harris elected to his former position.

While it may seem logical to presume that engaging in realistic gaming violence would encourage real-life aggression and antisocial behavior, there is little to no scientific evidence to support this hypothesis. Nonetheless politicians across the ideological spectrum, often point to video games when citing causes for school shootings or other shocking acts perpetrated by young people.

This nebulous causal connection between video games and violent behavior has inspired a slew of state-level regulatory controls over the sale of video games to minors. Generally, such regulations have been deemed to be unconstitutional restrictions of free expression protected by the First Amendment. However, one cannot help but wonder what effect potential changes in both the judicial and executive branches in the upcoming presidential election could mean for the gaming industry moving forward.

In Brown v. Entertainment Merchants Association in 2011, theU.S. Supreme Court ruled that California’s law regulating video game sales based on violent content was unconstitutional. The law would have banned certain violent video game sales to children under 18 without parental consent and stipulated a maximum fine of $1,000 per violation.

The restriction of speech or expression based on a work’s content is seldom permitted under the First Amendment. There are limited exceptions to this rule, of course, particularly with regard to content that is unreasonably hateful, obscene, or intended to incite violence.

How Did the Supreme Court Decide?

The High Court applied the Miller Test, a legal metric often used in cases that involve regulation of supposedly “obscene” speech not protected under the First Amendment. Ultimately, the Supreme Court agreed with the lower courts’ finding that the law was indeed unconstitutional.

Like other forms of media, video games are considered protected speech under the First Amendment. The Court’s opinion, authored by the late Justice Antonin Scalia, concluded that California offered no evidence that violent video games motivated real-life violence. Thus, there was no reasonable basis upon which the law could justify a content-based restriction of free speech. The Entertainment Software Association and the Entertainment Merchants Association were awarded $370,000 from California in lower-court legal fees. The state later agreed to pay an additional $950,000 for the Supreme Court case

While the video gaming industry was victorious, some Supreme Court justices insinuated that the issue should be revisited in the future. That future may not be too far away. Based on current polls, Harris may be the vice president in a week from now. Vested with federal power, her former policies on gaming may indicate what lies in store for the video games industry under a Biden administration.

Based on previous public statements, Biden, Harris, and President Trump seem to share the fallacious belief that real-world violence and bloody video games are linked. But with campaign pressure mounting, none of the candidates have spent much time discussing video games, an industry that is now larger than film and music combined. Biden recently walked back his position somewhat, citing violent video games as unhealthy, but not the reason for mass shootings.

It is becoming increasingly likely that a Biden Administration’s gun control policies would include the regulation of fictional violence. In a recent statement, Harris explicitly asserted that her definition of “law-breaking gun corporations” would include anyone violating negligence laws by marketing assault weapons to children in video games. If this is any indicator of their shared views, she and a Biden administration will probably maintain that there is a direct connection between gun violence and violent video games.

Amy Coney Barrett and the Future of Gaming

As Amy Coney Barrett’s Supreme Court nomination appears likely to be confirmed, the future of the judiciary’s attitude toward violent video games also may shift. The nomination may mark a dramatic conservative shift in the High Court or spur Democrats to retaliate by packing the court with liberal justices. Coney Barrett’s views generally align with those of the former Supreme Court Justice Antonin Scalia, for whom she clerked. But does this mean that we are likely to see a new precedent  based on the Trump Administration’s view that video violence creates real violence? Most likely, no.

As one of the nation’s leading conservative legal thinkers, Justice Scalia authored the opinion of Brown v. Entertainment Merchants Association. It is likely that future-Justice Coney Barret will hold fast to her mentor’s original view that such content-based restrictions are unconstitutional.

Will Video Game Violence Be Restricted Under Biden?

The Supreme Court did imply in Brown v. Entertainment Merchants Association that future courts might come to another decision regarding the sale of violent video games to minors. The dissenting opinions of Justices Clarence Thomas and Stephen Breyer argued that parents hold authority over the minor children and that the right to speak to minors must go through their parents or guardians.

Since that decision, other reports have found that video gamers have proven to be more attractive employees based on the skills they can bring to the workplace. Arguably, the contributions of these skills outweighs any negatively influence of violent video games. So, while it is indeed possible that the precedent set by the Entertainment Merchants case is reversed and restrictions placed on violent depictions in video games and other media, such a change in the law is highly unlikely.